Out My Backdoor: Chipmunks in Winter Present a Backyard Mystery 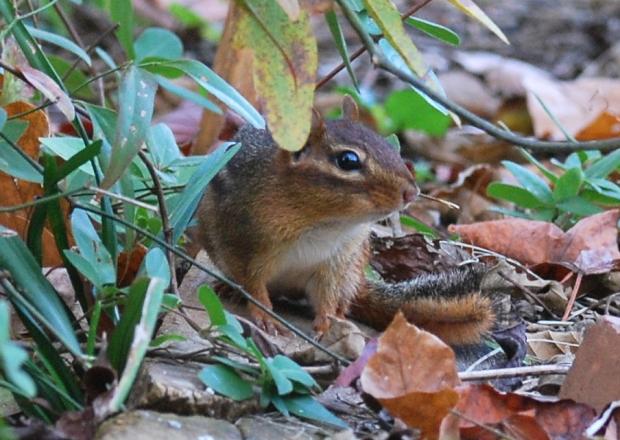 In spite of the fact that I have been watching wildlife in my yard for decades, I probably enjoy it more today than when I was a young boy. One reason for this is that the more I watch the creatures that live
just outside my backdoor, the more I encounter nature’s mysteries that beg to be solved.

Take the eastern chipmunk, for example. For weeks this fall I enjoyed watching chipmunks gathering sunflower seeds beneath my bird feeders. They would stuff their cheek pouches until they were bulging with seeds. Then, with their tails pointed toward the sky, they would scamper off to their burrows.

One day a few weeks ago while I was observing the comings and goings of the birds attracted to my feeders I suddenly realized that I hadn’t seen a chipmunk in quite some time. I cannot tell you when they disappeared any more than the date the chimney swifts using my chimney left on their long flight to their wintering grounds in the Amazon River basin.

Knowing that chipmunks escape the perils of winter by hibernating in their burrows stocked with a bounty of seeds, I assumed that I wouldn’t see a chipmunk until spring. That is why, I was surprised to see one out and about during a recent spell of unseasonably warm weather. The sighting prompted me to wonder, if chipmunks truly hibernate, why had this individual left the safety of its underground home so early in the new year?

In the spirit of notable sleuths like Jessica Fletcher and Sherlock Holmes, I launched an investigation aimed at unraveling this mystery. My detective work revealed that, while biologists have been researching chipmunk hibernation for quite some time, many perplexing questions regarding this common backyard resident still baffle the experts.

Until recently, many researchers questioned whether or not the eastern chipmunk was a true hibernator. Most hibernators remain inactive for months during hibernation, living off fat stored within their bodies. Chipmunks, on the other hand, awake from time to time to dine on the nuts and seeds stored in their underground larders. During these times the animals rarely leave their burrows.

The experts also doubted that the chipmunk’s respiratory and heart rates and body temperature dropped as low as other animals that hibernate. However, recent advances in technology have enabled us to accurately measure these vital signs. Numerous studies have shown that, in chipmunks, they do plummet to exceedingly low levels similar to those of other true hibernators.

Throughout the year a chipmunk takes 60 or more breaths per minute. While hibernating this rate drops to fewer than 20 per minute. Additionally, the animal’s heart rate plummets from 350 to only 15 beats per minute. And the normal body temperature of an eastern chipmunk, which ranges from 96 to 106 degrees Fahrenheit, declines to only 42 to 45 degrees.

When chipmunks hibernate, they coil themselves into a ball. If you were to accidentally unearth a hibernating chipmunk, its eyes would be closed and it would feel icy cold. It can take an animal in this condition a couple of hours or more to awaken from its slumber.

What makes things even more perplexing is that individual chipmunks can change their hibernating behavior from year to year. However, researchers do generally agree that hibernating chipmunks are
most apt to leave the safety of their burrows during unseasonably warm weather early in the winter.

There are many unanswered questions regarding chipmunk hibernation. For example, what triggers hibernation? Another burning question is what influences the length of hibernation?

What we do know is that chipmunks don’t simply enter their burrow one day and immediately begin hibernating. It appears that these small mammals gradually prepare for hibernation. This involves going through times when they alternate between periods when they are active and semi-active. During this process, their breathing rate slows and their body temperature goes down. In addition, the times when the animals are inactive grow longer.

I suspect that, in spite of the hard work of top-notch researchers across the country, all of the mysteries swirling around the hibernation of this furry sprite will not be solved in the near future. In the meantime, I have dozens of mysteries relating to my backyard neighbors that I need to investigate.

If you will simply take the time to watch the comings and goings of the animals that live just
outside your backdoor, you will, too.