Out My Backdoor: Catbirds on the Prowl 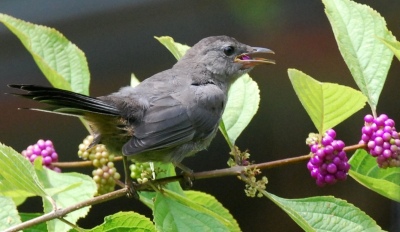 Like most backyard wildlife enthusiasts, it seems I’m forever trying to thwart squirrels and housecats from feeding at bird feeders. Though I really don't mind squirrels dining on seeds from time to time, I have no patience when cats try to pounce on birds sampling sunflower and millet seeds.

For that reason, whenever I see one of these interlopers approaching my feeders, I bolt out of the house and scare it away.

Often during spring and summer while sitting on my deck or walking around the yard, I hear "meeeow, meeeow" coming from a thick shrub. Invariably, when I hear this call the first thing that pops into my mind is that a house cat is on the prowl again. However, more often than not, the critter making the call is a gray catbird, and not a feline.

Unlike the red-bellied woodpecker, which doesn't actually have a distinctive red breast, the gray catbird is aptly named. This bird is gray and one of its calls does sound like the meowing of a cat. Even the catbird's genus name, Dumetella, was well chosen. It is based on the Latin word for thorny thicket. Indeed, the bird prefers to live in thorny or brushy areas.

The gray catbird is a spring and summer resident across the length and breadth of the Peach State. In fall, most gray catbirds retreat to the warmer climes of the Caribbean, Mexico and Central America. However, each year small numbers of them winter here, particularly in south Georgia.

Fortunately for backyard wildlife watchers, the gray catbird commonly inhabits backyards that feature islands of dense shrubs or are bordered by brushy areas. However, many homeowners never realize that gray catbirds are living in their yards. This is due to its often secretive habits, preference for thick cover and its somber plumage.

The gray catbird is a bit smaller than a mockingbird. A black cap adorns its head. While its tail is black, the gray catbird's wings and body are predominantly slate gray. Interestingly, the feathers beneath the bird's tail are rufous.

Since you may already be unknowingly hosting gray catbirds, once you become familiar with its song and calls, your chances of adding a new bird to your yard list should increase. When you first hear the bird sing, it seems that the song is nothing more than a garbled potpourri of sounds. However, the more you listen to it, the more you realize that this bird is a master vocalist.

The gray catbird blends into its song snippets of the songs of a number of other birds such as the whip-poor-will, orchard oriole, house wren, American robin and wood thrush. On top of that, in addition to its catlike calls, the gray catbird mimics frogs and male mallards.

Gray catbirds begin arriving in Georgia during the first few weeks in April. Males show up a week or more ahead of the females. Soon thereafter they begin looking for the best breeding territories. These areas can range anywhere from 1 to 3 acres in size. If you are lucky are lucky enough to have your yard fall within the invisible boundaries of a breeding territory, you will enjoy the pleasure of becoming better acquainted with this often elusive bird.

It is always exciting to find a nest. Often the behavior of a male gray catbird will provide a clue that its nest is nearby. If you accidentally walk close to the nesting site, he will often give the meow call, perch and raise his wings or fluff out his body feathers.

Catbird nests are usually built in a thick tangle of vines and branches, or thick shrubs 3-10 feet above the ground. The nest is a bulky affair of twigs, grasses, scraps of paper and leaves. If no eggs are found in the nest, it is often difficult to tell the nest of a gray catbird from that of a northern mockingbird. However, if you find the nest contains a clutch of greenish blue eggs, you know you have found a gray catbird's nest. Mockingbird eggs are bluish to green and adorned with brown splotches.

Strangely, gray catbirds often will partially build a few nests. However, the female is the one that fabricates the nest in which she lays her eggs. In our neck of the woods, a female may nest two to three times a year. While the female may build the nest and incubate the eggs, both parents feed the hatchlings. If the parents are lucky they will raise three to five young each time they nest.

If you find the nest, take a quick look and then move on. The last thing that you want to do is disturb a nesting female and jeopardize the chances of her successfully raising her young.

It’s not difficult to make your yard more attractive for gray catbirds. This is especially true if thick brushy habitat is already present or close by. However, if this habitat is lacking, begin by creating shrubby islands.

Without this thick habitat, your chances of attracting the birds are slim.

Next, ensure that there’s an abundance of food throughout the spring and summer. Gray catbirds eat fruits and berries as well as a variety of beetles, grasshoppers, caterpillars and other invertebrates. Invertebrates tend to dominate their diet during the breeding season when they are feeding young; however, over the course of a year the birds eat more berries, fruits and the like.

In my yard, when mulberries ripen in May and June, gray catbirds gorge themselves on the sugary-sweet fruit hanging from the trees. Later in the summer, they devour brightly-colored American beautyberries. They are also fond of blackberries, dogwood berries, blueberries, grapes, pokeberries, hackberries and poison ivy, to name a few.

I have seen a catbird visit a seed feeder only once. This bird poked through sunflower seeds for several minutes before moving on. However, I have found that they will readily come to suet/peanut butter cakes and peanut butter.

The birds will also eat mealworms and raisins. It has even been reported that catbirds have been known to dine on corn flakes and puffed wheat and milk!

It is also a good idea to provide them with a source of water. In my yard, these handsome gray and black birds readily bathe and drink water from a bird bath.

The gray catbird is an honored summer resident in my backyard. I enjoy watching them as they go about the serious business raising a new generation of catbirds. I like hearing a meeeow coming from the shrubbery and wondering if a cat or catbird is on the prowl.

But perhaps most of all, I enjoy being serenaded with their repertoire of songs and calls late in the afternoon as the sun slips below the horizon. It is a relaxing reminder that the natural world is just outside my backdoor.