Out My Backdoor: Can Birds Predict Severe Weather? 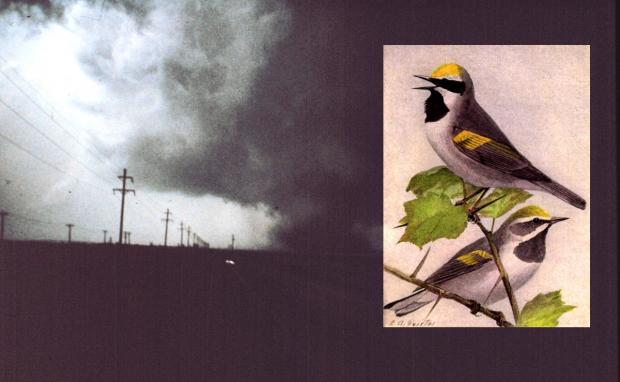 We have long depended on wild animals to predict the weather.

For example, each year on Feb. 2, groundhogs are hauled out of their winter abodes to tell us whether we will have six more weeks of unpleasant weather. The yellow-billed cuckoo, often called the rain crow, has been relied on to warn us if a storm is on the way. Even fish and crows are on the list of animals that humans have depended on to forecast the weather.

Nowadays in an age when we rely on sophisticated technology for those predictions, it is easy to view the belief that animals can do the same as legend or superstition. Right? Not exactly.

Some birds appear to possess a storm-warning system that, in some ways, may be way ahead of the best systems we have in place. This ability was discovered a few years ago by biologists studying golden-winged warblers in the Cumberland Mountains of east Tennessee.

These scientists were actually researching the migratory patterns of this small warbler – a bird that nests in east Tennessee and winters in South America. The study involved catching the birds in mist nets and attaching tiny tracking devices that recorded their movements.

For no apparent reason, the warblers disappeared just two days after they arrived on their breeding grounds, only to reappear five days later. This left the biologists scratching their heads trying to figure why the birds abruptly left and where they had gone.

Later, when data were downloaded from the tracking devices attached to five of the 20 birds, the biologists learned that the birds had actually left Tennessee and flew at least 932 miles south back to the Gulf Coast. Then the warblers returned to their mountain breeding grounds.

Why the uncharacteristic movements? The answer lay in some of the weather data collected during that period. The birds left their Tennessee breeding grounds while it was raining and arrived along the Gulf, where it was also raining. As such, rainfall was not the reason the birds flew south. The difference apparently was that a powerful weather front was 250-500 miles away and approaching. This horrific storm would spawn 84 tornadoes and take the lives of 35 people.

Amazingly, days before the forecasters issued their first warnings of the approaching storm front, the warblers were already winging their way south.

The question researchers kept asking themselves was, "How did these tiny birds know what was coming before the forecasters did?"

One member of the research team, Henry Streby, suggested that low-frequency sound waves generated by the large storm triggered the birds' departure. These sounds are in a frequency range less than 20 hertz and cannot be discerned by the human ear.

Researchers have long realized that these sound waves, called infrasound, travel long distances and are created by tornadoes and other natural events, such as ocean waves breaking on the beach and even volcanic eruptions. Although it has been proven that animals can detect infrasound, if the golden-winged warblers did indeed leave their breeding grounds because they picked up the low-frequency sound generated by a powerful storm, this would be the first documented case where infrasound waves influenced bird movements in the path of a storm.

At least one tornado expert, John Allen, then of Columbia University’s International Research Institute for Climate and Society, is not so sure that infrasound waves precipitated the birds' departure. Yet, Allen said in an NBC news report, "Clearly they are sensing something that we can't, and that's really interesting. Those warblers are predicting weather better than we are."

Upon learning of the Tennessee findings, University of Pennsylvania School of Veterinary Medicine, adjunct professor Dr. Erica Miller said, "This is the first really sound data showing that, yes, animals can sense severe storm systems and will evade them. Certainly, we have a sense of that from lots of anecdotal stories, like birdfeeders swarmed by birds the day before a big snowstorm. …"

"I am most familiar with birds,” Miller added, “but I know from talking to my colleagues that even zoo animals will act differently when there is a storm coming. They may spend more time their dens or more time pacing. They just know something is up."

I am sure that the data will spark more research on this subject. Perhaps the day will come when the forecasting ability of birds and other animals will help human forecasters fine-tune their weather predictions, further lessening the loss of life to tornadoes and other severe weather.

Terry W. Johnson is a former Nongame program manager with the Wildlife Resources Division and executive director of The Environmental Resources Network, or TERN, friends group of the division’s Nongame Conservation Section. (Permission is required to reprint this column.) Learn more about TERN, see previous “Out My Backdoor” columns, read Terry’s Backyard Wildlife Connection blog and check out his latest book, “A Journey of Discovery: Monroe County Outdoors.”