Out My Backdoor: the Cabbage White 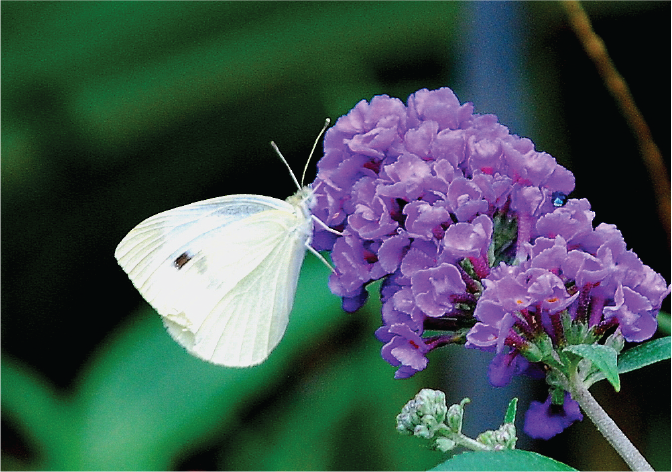 Out My Backdoor: the Cabbage White

Back in the day when I was younger, more agile and had a full head of hair one of the songs often played on the radio was “Devil or Angel.” The lyrics to the song began, “Devil or angel, I can’t make up my mind which one you are. …” Although the song dealt with the trials and tribulations of teenagers in love, in a way it could also apply to our relationship with the cabbage white butterfly (Pieris rapae). Although the cabbage white is beautiful, it is also one of a handful of butterflies that is considered a crop pest.

The cabbage white is much smaller than our well-known state butterfly, the eastern tiger swallowtail. When its wings are outstretched, it measures 1½ to 2 inches from wing tip to wing tip.

At a distance, the cabbage white’s wings appear pure white. However, if you take a close look at one, you will see that the undersides appear to have been tinted with a delicate yellow watercolor wash.
For this species, it is easy to separate male from female. The male’s forewings are marked with a single black spot, while the female’s forewings have two black marks.

The cabbage white is common across all of Georgia’s 159 counties. However, this was not always the case. The dainty butterfly is native to Europe, Asia and North Africa, and only arrived on the shores of North America in 1860. First reported here in Quebec, Canada, the cabbage white found the New World to its liking and spread quickly. By 1889, its numbers and range had expanded so dramatically it was a commonly seen in and around Philadelphia. By 1900, it had spread its wings across the length and breadth of the continent.

The white butterfly’s ability to quickly colonize lands well beyond its home is well documented. Records show that it has expanded its range across the temperate regions of the Northern Hemisphere, as well as Australia and New Zealand. Consequently, it is not surprising that the cabbage white is recognized as one of the most highly successful butterflies in the entire world. In fact, lepidopterists (butterfly experts) consider the cabbage white one of the world’s most prolific butterflies.

The species owes its ability to colonize to the fact that it is a true generalist. Unlike most other butterflies, it does well in a wide variety of climates and habitats. Here in the Peach State, it is just as likely to be seen fluttering about backyards and parks in Atlanta as it is in open meadows in the Georgia mountains, gardens in Forsyth or croplands in south Georgia.

As the name implies, cabbage is a common host plant; however, the cabbage white will also lay its eggs on members of the mustard family. The roster of other plants that serve as a host for this butterfly in Georgia includes wild mustard, turnips, cauliflower, broccoli and nasturtiums. That lineup often brings the cabbage white into conflict with farmers and home gardeners. Understandably, folks tend to get upset when they discover that the butterfly’s small green caterpillars – marked with tiny yellow dashes – have been devouring the leaves of their leafy, green vegetables.

Needless to say, a cabbage white caterpillar found in the wrong place at the wrong time by a farmer or gardener has no protection from the fate that awaits it. But Mother Nature does offer cabbage white caterpillars some defense against ants. It seems that the thin hairs on the caterpillars give off chemicals called mayolenes. These chemicals keep hungry ants at bay. In addition, female cabbage whites also lay their eggs on plants growing in early successional habitats – habitats in which insect predators and parasites are less common.

When we spot a cabbage white flying about it is easy to assume that it is living a long carefree life. Nothing could be further from the truth. A cabbage white’s adult life is quite short. Many don’t live more than five days. If one is really fortunate, it may fly about for up to three weeks. During this abbreviated life span, the butterflies must find mates and produce a new generation. Consequently, it spends the majority of its adult life nectaring on flowers, looking for mates and laying eggs.

Males will patrol an area day after day looking for females. These searches are particularly common in the morning. After mating, females spend most of their time laying eggs on suitable host plants. The female’s ability to pick plants with high rates of photosynthesis helps ensure her caterpillars a greater chance of survival. If a female lays an egg on a plant other than a host plant, or a plant in poor condition, the caterpillar that hatches is more likely to starve. For cabbage white caterpillars, the difference between a wild mustard plant and a Bradford pear leaf can be life or death.
A female cabbage white will lay roughly 700 eggs during her brief lifetime. Each pale-yellow egg is deposited singly. This keeps her continually on the move.

If you want to attract cabbage whites to your flower garden, offer them some of the host plants mentioned and plant flowers that have purple, blue or yellow blooms. Cabbage whites are attracted to these colors more than plants bearing green, white or red blossoms.

The cabbage white reminds me of a petal falling from a flowering dogwood on a cool April day. (Then when I glimpse one flying about my yard on a stifling hot, humid afternoon in August, I am able to recollect the fond memory of the cabbage white I mistook for a falling dogwood petal in spring.)
At the same time, if I am going to raise a crop of broccoli or cabbage in my backyard garden, I know I will have to spend time plucking cabbage white caterpillars from the plants’ tender foliage. But being able to enjoy the beauty of these butterflies outweighs having to put in a little time protecting my garden from their voracious caterpillars.

Devil or angel? When it comes to the cabbage white, I guess this is a question each of us has to answer.

Out My Backdoor: It's Four O'Clock Time

One thing I have learned over the years is that most of my wildlife neighbors are opportunists. As such, they take advantage of whatever food sources are available to them. Currently, since four o'clock are in full bloom, a handful of nectar feeders are homing in on this colorful garden favorite.

Out My Backdoor: The Caterpillar Connection

Would you believe me if I said you could help preserve and enhance our native plant and animal heritage as well as the environmental health of Georgia without ever leaving your home? Probably not.

Out My Backdoor: Cloudless Sulphurs: Fall's Most Overlooked Migrant

By the time autumn officially arrives, the fall migration of many migratory birds such as warblers, flycatchers and vireos has passed us by.

Out My Backdoor: Butterflies in Winter?

Backyards that harbor an abundance of wildlife are indeed special places.

Out My Backdoor: Redbuds Are on Parade

One of the things I enjoy most about spring is that at this time of year we are treated to Mother Nature's annual parade of wildflowers.

Out My Backdoor: Puddle Parties

We enjoy all sorts of parties.