Out My Backdoor: Brown Thrashers, a Special Songster 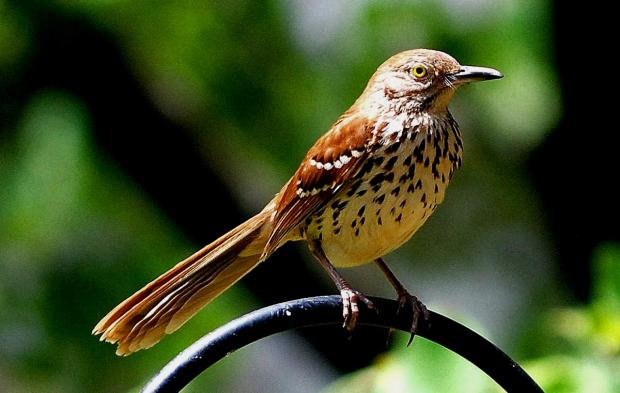 Currently, my wife and I are enjoying listening to the songs of mockingbirds, orchard orioles, gray catbirds, cardinals and brown thrashers. The birds are particularly vocal early in the morning and late in the day.

The musical entertainment even continues throughout the night. For some reason, we have heard more whip-poor-wills call this year than we can ever remember. Many nights the birds have seemed to be calling from our yard. Occasionally the whip-poor-wills have been joined by a chuck-wills-widow or two.

Now, although one of the vocalists listed above is a champion songster, its vocal skills often go unnoticed or are attributed to another bird. This bird is the brown thrasher.

The brown thrasher is best known as the official state bird of Georgia. It lives in all of Georgia's 159 counties, and commonly inhabits yards where there is abundant shrubbery.

Although most Georgians recognize this large (up to 11.5 inches long), golden-eyed, rusty-brown bird with a brown-splotched white breast, its vocal skills go largely unappreciated.

One reason the male brown thrasher's musical talents are not fully appreciated is that although he will sing from the tops of trees, this performer frequently sings its arias out of sight in the seclusion of thick, leafy shrubs or vine-covered thickets.

Consequently, since the brown thrasher's songs frequently sound so much like those uttered by the northern mockingbird, a bird that prefers to sing out in the open, many casual listeners attribute all thrasher and mockingbird song to the mockingbird. They never realize that some of the most musical tunes are often sung by the brown thrasher.

However, to the trained ears of those who recognize the subtleties that exist between the songs sung by both birds, the brown thrasher's vocal talents exceed those of the northern mockingbird. Some go so far as to suggest the thrasher’s tones have the qualities of the notes that flow from musical instruments such as the clarinet, piccolo, violin and flute.

Once you learn how to separate the songs of the two birds, you will never confuse them again. The northern mockingbird repeats its song three or more times. In comparison, the brown thrasher repeats its melodic phrases only twice.

In addition, to performing their own songs, common backyard residents such as catbirds, mockingbirds, and thrashers also mimic other birds. For example, the list of birds the brown thrasher mimics includes the northern flicker, tufted titmouse and cardinal.

If you were to ask somebody which bird has the most extensive repertoire of songs, more than likely they would quickly answer, "The mockingbird." This is understandable as, over the years, writers have touted the mockingbird's considerable vocal talents. This reputation is well earned, since the bird is known to sing more than 200 different songs.

Yet, while the mockingbird’s songbook is impressive, it pales in comparison to the brown thrasher’s. With the aid of modern technology, ornithologists have discovered that the brown thrasher can sing 1,116 song types in as many as different 1,971 songs. New research suggests that this large songbird’s number of songs sung might exceed 3,000.

In addition to its multi-phrased songs, the brown thrasher also utters a very loud call that sounds like lips smacking. We hear this note whenever we or the family cat ventures near a tea olive growing in our backyard. This is a not so subtle reminder that two brown thrashers are nesting within the shrub’s dense foliage and branches.

I hope you will take the time to listen to the songbirds singing around your home. Chances are you will eventually hear a brown thrasher. Even if you don’t, you will enjoy listening to a musical ensemble sung by a host of other songbirds. After hearing their performances, I will be willing to bet that you, like me, will realize you do not have to travel to large concert halls to hear some of our greatest vocalists.