Out My Backdoor: The Best Backyard Olympians

Some of the most breathtaking events in the Olympics involve speed. The fastest Olympians can run as fast as about 28 mph. However, mere mortals like you and me rarely break the 18-mph barrier.

I know that you will find it comforting to know that the American cockroach runs faster than any insect likely to be found your backyard. It can scurry across the ground at 3.4 mph. This may not sound like anything to brag about until you consider that this universally disliked insect scoots along the ground at a rate of 50 body lengths per second. This is comparable to a human running 210 mph.

Many folks think that a spider can run fast. Actually, in spite of the fact that they have eight legs, most spiders only reach a running speed of slightly more than 1 mph.

Snakes wouldn't compete well in backyard wildlife Olympic Games, either. They move across the ground at an average of 5-8 mph. This is about fast as we can walk. Should you be lucky enough to spot an eastern coachwhip snake in your backyard, it would race for cover at upward of 10 mph. Its only competitor for the gold in our backyard Olympics is the black racer, which can move almost as fast as the much larger coachwhip.

The mammals that inhabit our backyards would carry home all of the medals relating to speed in our fantasy Olympic Games. The white-tailed deer that slip into our backyard to partake of our flowers, shrubs and vegetables would challenge for the gold with their maximum speed of 35-40 mph. 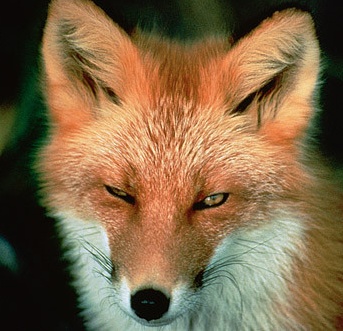 However, they would be hard-pressed to outpace coyotes, and both red and gray foxes. These predators would likely race to a photo finish. Coyotes have been clocked at 43 mph. Close behind are gray foxes, which can run at least 42 mph. But the red fox would be a slight favorite; it can attain a speed of 45 mph.

When talking about speeds, we also have to consider how fast some animals fly. An untold number of birds and insects are in the air over our backyards day and night.

Dragonflies are the fastest insects there, with few of these masters of the air reaching speeds of 30-plus mph.

What about birds? Most songbirds fly no more than 20 mph. Ruby-throated hummingbirds, however, zip from flowers to feeders at some 25 mph. Blue jays can fly 20 mph, while robins have been clocked at 35 mph. In comparison, eastern bluebirds can reach 17 mph. Under the cloak of darkness, a great horned owl can cruise at 40 mph.

However, the mourning dove is likely the fastest bird found in Georgia backyards. Mourning doves have an average flight speed of 37-40 mph. Yet it’s said they reach a top speed of 55 mph.

Bringing up the rear of a race between backyard birds would be the house sparrow. This alien species lopes along at 16-19 mph.

Olympians compete in vertical (high) and horizontal (broad) jumping events. The most accomplished high jumpers can clear an 8-foot bar. However, pole-vaulters can soar more than 20 feet high.

If you awarded a gold medal to the backyard animal that jumps the highest in relation to its body size, the flea that plagues our pets and a variety of backyard denizens would win hands down. Although a flea doesn't jump more than 7 inches high, that’s more than 80 times its height. This equates to a 6-foot man jumping higher than 1 1/2-half football fields, or 488 feet.

If you judge contestants on the actual height reached, the white-tailed deer would win. The U.S. Department of Agriculture says white-tailed deer can jump 15 feet high. By the way, that is much higher than the 6.5 to 8 feet height recommended for deer-proof fencing. In comparison, gray squirrels can leap 4 feet off the ground.

The world-record broad jump is 29.36 feet. However, the broad jump in our backyard Olympics would also go to the flea. The tiny flea can jump horizontally about 13 inches, which is approximately 220 times its length.

Tree frogs would most likely earn the silver medal. They can jump 150 times their body length. If a human had this ability, he or she could jump the length of the ill-fated HMS Titanic.

The jumping spider would earn bronze. These spiders can jump 100 times their body length. That is like a human jumping a distance equal to the length of a basketball court. In comparison, white-tailed deer are said to be able to broad jump 30 feet. A gray squirrel can leap only 9 feet.

The world record for a bench press is 965 pounds. Needless to say, none of the animals that live in my backyard could lift such an awesome weight. If one could, I don't think I would be leaving the house very often.

But among weightlifters in my yard, the great horned owl or the coyote would probably challenge for the gold. A 3-pound great horned owl can carry off an animal weighing 9 pounds. While a coyote can pull something double its weight, it carries prey weighing much less.

An argument could be made that top honors should go to the ant, which can carry 50 times its weight. If an Olympic weightlifter shared this ability, he could hoist 4 tons!

I think that you will agree the athletic skills of our backyard neighbors are every bit as impressive of those of the Olympic athletes. There is one thing to keep in mind when comparing athletic abilities, though: Humans use their prowess to compete in events for fun, while our wildlife neighbors use their athletic skills to survive.