The bird that controls the air space over our yards throughout spring and summer is the ruby-throated hummingbird. Although it is so small that 10 can be mailed for the price of a first-class stamp, no other bird can threaten its aerial superiority. As is the case with supersonic aircraft that coarse the skies of the world, this feathered dynamo operates on a high-energy fuel. In the hummingbird’s case, the fuel is sugar.

Traditionally, hummingbirds obtain most of this energy by eating nectar from flowers—a lot of flowers. A hummingbird sometimes visits upwards of 1,500 flowers a day to meet its energy needs. If we had the same rate of metabolism, we could consume 155,000 calories worth of candy bars, French fries and ice cream sodas every day and never have a worry about gaining an ounce of weight. 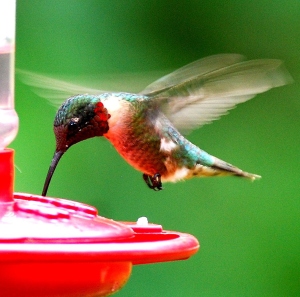 Some 101 years ago a lady by the name of Caroline Soule crafted the first hummingbird feeder. Little did this homeowner know that her invention would change the lives of hummingbirds and hummingbird fanciers. Her feeder was a simple affair consisting of nothing more than an artificial trumpet creeper blossom stuffed into the opening of a glass bottle containing sugar water. When she first hung her feeder in the yard of her Brookline, Mass., home, she didn’t have to wait long to see if hummingbirds would use it. In practically no time at all, hungry hummingbirds were regularly visiting the odd source of food.

We may never know the strength of the sugar-water solution Ms. Soule used. Over the past century, a number of feeding solutions have been tried. One of the first foods offered hummingbirds was honey. In the minds of many, it stood to reason that this natural food would be ideal. Sadly, honey proved to do more harm than good. To begin with, it contains sugars quite different from those found in the nectar of flowers. Honey consists of dextrose while nectar contains a sucrose-fructose compound. If that wasn’t enough, honey-water mixtures quickly become contaminated with bacteria and fungi that can cause lesions on a hummingbird’s tongue.

Through trail and error, hummingbird enthusiasts and biologists alike eventually learned that a simple mixture of 4 parts water to 1 part white sugar is the best food to offer hummingbirds in the wild.

Making this energy-rich fuel is a cinch. Simply mix 4 parts of water to 1 part of sugar. Bring the water to a rapid boil before adding the sugar (boiling the water helps retard the growth of bacteria and fungi in the liquid). Once the sugar dissolves, boil the solution for 2–3 minutes. Some folks use extra fine sugar to prepare their hummingbird food because it will more rapidly dissolve in water.

A 4:1 mixture of water to sugar closely approximates the 21-percent sugar content of flower nectar. Claims abound that feeding hummingbirds stronger solutions can cause kidney damage. To my knowledge this has never been proven. However, some writers suggest feeding hummingbirds a 3:1 or stronger mixture in cold weather when the nectar flow of many flowers decreases. That being said, I recommend that you stick with a 4:1 mixture.

I give scores of programs on hummingbirds each year. One of the most common questions asked at these presentations is, “Should I feed hummingbirds clear or red nectar?”

I once asked the major manufacturer of hummingbird food why his company added red food coloring to its nectar solutions. He answered by saying it was not because the hummingbirds like it more; it was simply because his customers prefer it.

I believe that most of the folks that use red food coloring do so because they believe the color of the fluid attracts the birds. Actually, there is enough red on the feeder itself to attract hungry hummingbirds. In fact, at least one research study found that hummingbirds will visit feeders that don’t display anything that is red.

On the other side of the coin, people often tell me that they don’t use red nectar because they fear that the red dye used to color the fluid will cause cancer. I believe this stems from the discovery that a once popular food additive, Red Dye No. 2, was carcinogenic. However, Red Dye No. 2 was taken off the market years ago. As far as I know, red food coloring has never been linked to cancer in hummingbirds.

The bottom line is that use red food coloring if you want, but it won’t attract any more hummingbirds to you yard.

Actually, the greatest threat posed by feeding hummingbirds sugar water stems from the fact that many homeowners don’t regularly change their hummingbird food. When you see black spots forming on the inside of the feeder or the fluid becoming cloudy, it is long past time to change it.

During July and August when temperatures daily soar to 90 an above, it is a good idea to change your solution every two to three days.

At no time of the year is a hummingbird’s need for nectar greater than in summer. During these languid days when cicadas are calling loudly from the treetops and each passing day is shorter than the one before, hummingbirds go on a feeding binge. They are preparing to embark on an epic journey to their wintering grounds. A trek that will carry them over a minimum of 500 miles of the waters of Gulf of Mexico. They will make many stops to refuel while they are flying overland, however. In order cross the Gulf they will need to carry with them 3/40th of an ounce fuel stored as fat.

As the face of our landscape changes, hummingbirds, like warblers, thrushes and other long-distance migrants are finding it increasingly more difficult to find enough food to successfully make their migration flights. Our hummingbird feeders are making it easier for rubythroats to quickly “tank up” on the fuel they need to make the trip.

With that in mind, just remember that a simple solution of 4 parts water to 1 part sugar can supply hummingbirds with an abundant source of energy while at the same time providing us with countless hours of enjoyment watching the aerial acrobatics of this truly remarkable bird.