Vaughters’ Barn is an iconic remnant of DeKalb County’s rural past and a part of Panola Mountain State Park. The barn sits on an agricultural landscape that is a centerpiece of the Arabia Mountain National Heritage Area (AMNHA). 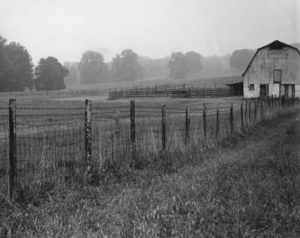 DeKalb County was at one point the biggest dairy producer in the state of Georgia. Vaughters’ Farm was part of that patchwork of agriculture, and S. B. Vaughters was one of the most successful dairy farmers in the area. As urban sprawl inched out of Atlanta over the course of the 20th century, Mr. Vaughters sought a different future for his land: “I didn’t want that here,” he said. He sold his land to the state in 2002. Today, Vaughters’ farm is part of Panola Mountain and offers visitors a glimpse of the county’s rural past.

Over the course of his career as a farmer, Vaughters used the barn for cows – first Jersey cows, producing dairy, and later for Angus cattle – and finally for horses. The animals inhabited the first floor of the building, while the spacious second story was used for storage. Like many of the agricultural buildings found throughout the Arabia Mountain National Heritage Area, Vaughters’ Barn was built as a functional structure: as S. B. Vaughters’ needs changed, so did the barn itself.

Panola Mountain State Park partnered with the Arabia Mountain National Heritage Area (AMNHA) to restore the barn for future generations. AMNHA is dedicated to preserving the historic structures throughout the National Heritage Area. The restoration project cost approximately $200,000 with the state and AMNAH donating half the funds each. This project included stabilizing the barn after the walls and roof had begun to bow outwards and repairs to the interior after water damage over the years had occurred. A portion of the hay loft was cut out to allow visitors a better view of the loft and better appreciate Vaughters’ decades of successful farming. Renovations started in the fall of 2018 and were completed in December of 2018.

Vaughters’ Barn is a natural resource as well as well as a historic one; already one of the most popular photography sites and the PATH Hiking and Biking Trail. The barn and its surrounding meadow support a variety of wildlife. Deer, wild turkeys, meadowlark and countless other species can be found in the old cattle pasture. Panola Mountain State Park and Arabia Mountain National Heritage Area are working together to make continuous improvements to the Barn and the site.