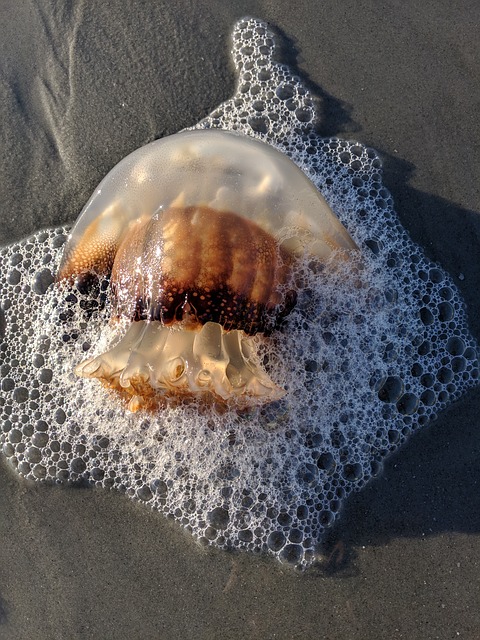 Cannonball jellyfish can typically be found in estuaries and saline water, usually by the shoreline. Preferred water temperature ranges between 20.3 degrees Celsius and 24.5 degrees Celsius.

Cannonball jellyfish (sometimes referred to simply as cannonballs) are by far the most prominent species of jellyfish on the southeastern coast of the United States. During the seasons of fall and summer, they are found to be incredibly abundant. During these times, cannonballs make up over 16% of biomass on the coastline. They primarily eat zooplankton and red drum larvae. When disturbed or threatened, the cannonball jellyfish will secrete a toxic mucus that will harm small fish, and drive away most predators. Some crabs, however, are not driven away by this mucus and will continue to attack/eat the cannonball. Although cannonball jellyfish are not known for stinging humans, the toxin from a cannonball can cause cardiac problems in both humans and animals alike.

While cannonball jellyfish produce the same benefits as other jellyfish, i.e. helping to stir the ocean waters and existing as food for other creatures, cannonballs also prove to be beneficial to human beings. Some shrimp trawlers have turned to cannonball jellyfish as a food industry when shrimping season is closed. While most people regard jellyfish to be bland in flavor, there has been a demand in Asia for dried jellyfish for a long time. Therefore, people are turning around left and right to start fishing for these cannonballs and export them to Asia.