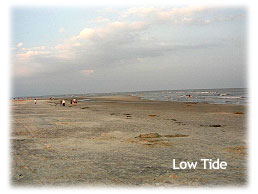 Tides are huge “waves” that are caused by the gravitational attraction between the earth, the moon and, to a lesser extent, the sun. High tide is the crest of the wave and low tide is the trough of the wave. All objects have a gravitational attraction to each other. The amount of gravitational attraction between two objects depends on how close together they are and how large they are. Because the moon is closer to the earth it has a greater effect on the earth’s tides than the sun does, even though the sun is much larger. Sir Isaac Newton, in his Universal Law of Gravitation, explains this. His law states that the pull of gravity is directly proportional to the product of the masses of the two objects and inversely proportional to the square of the distances between them. The sun, even though much larger than the moon, is only 46 percent as effective in producing tides because its distance from the earth is so great. 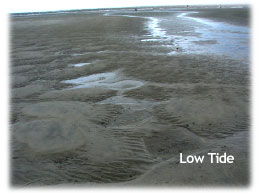 The earth revolves around the sun once every 365 days. It rotates on its axis once every 24 hours. The moon revolves around the earth once every 29 days. As the moon revolves around the earth, the gravitational attraction of the moon pulls the earth’s water toward it. This causes tidal bulges, which are bulges of water that occur on the side of the earth facing the moon. The earth’s rotation creates centrifugal force that causes another, almost equal, bulge to occur on the opposite side of the earth. When these bulges hit land and the water piles up, the land under the bulges experiences high tides, while the land not under the bulges experiences low tide.

High tides occur approximately 50 minutes later from one day to the next because in the 24 hours that it takes the earth to rotate once, the moon has moved about 12 degrees in its 350 degree orbit around the earth. Since the moon is orbiting in roughly the same direction as the earth is rotating, it takes an earth based observer another 50 minutes to get to a point where the moon is in about the same position overhead. 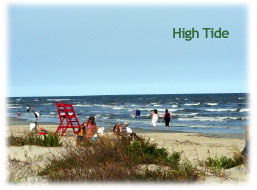 Twice during the moon’s 29 day orbit, the earth, moon, and sun are in a straight line. This alignment occurs at the new and full moon phases. At the new and full moon phases, the combined gravitational pull of the sun and moon creates higher than average high tides and lower than average low tides. These tides are called spring tides. If the sun and moon are both on the same side of the earth, the spring tide will be even higher.

When the moon is at right angles to the earth and the sun in its orbit around the earth (at the first and third quarter phases) the gravitational attraction of the sun and moon almost cancel each other, causing lower than normal high tides and low tides that are higher than average. These tides are called neap tides.

The vertical difference between high and low tide is called the tidal range. Georgia’s average tidal range is seven feet. The spring tidal range for Georgia is 10 feet. 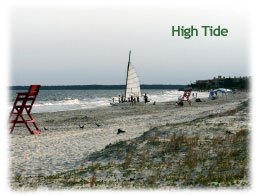