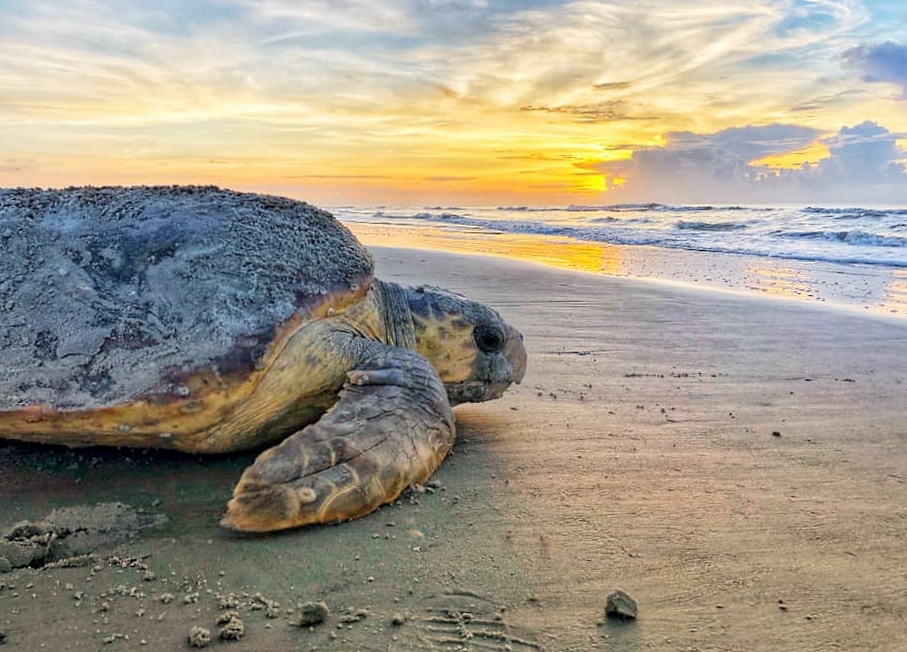 Loggerhead sea turtle nesting in Georgia hit a new high this week as the big reptiles beat their modern-day best for most nests on the state’s beaches.With nesting slowing and hatching surging, the nest count reached 3,953 Sunday and crawled past 3,960 this morning, according to the Department of Natural Resources.

Loggerhead sea turtle nesting in Georgia hit a new high this week as the big reptiles beat their modern-day best for most nests on the state’s beaches.

With nesting slowing and hatching surging, the nest count reached 3,953 Sunday and crawled past 3,960 this morning, according to the Department of Natural Resources.

That eclipses the 3,950 nests in 2019, the previous record since comprehensive surveys began along the Georgia coast in 1989. The state’s primary nesting sea turtle hit a low of 358 nests in 2004.

Georgia Sea Turtle Program Coordinator Mark Dodd welcomed news of the record total but cautioned that loggerheads remain on a long if promising path to recovery.

“Loggerheads are a long-lived species that don’t reproduce until 30-35 years of age,” said Dodd, a senior wildlife biologist with DNR’s Wildlife Conservation Section. “Based on current trends, we predict it will take at least another 20 years before we reach our recovery goals.”

The region’s population of loggerheads – listed as threatened under the Endangered Species Act – has been increasing at approximately 4 percent annually since the early 1990s. However, modeling developed by the University of Georgia and the U.S. Geological Survey using nest and genetics data indicates the population will plateau at current levels for about the next 20 years, its progress hobbled by low recruitment during the early 2000s, Dodd explained.

If current protections remain in place at least through that period, the model suggests loggerhead numbers will increase again, possibly reaching levels not seen since the late 1950s.

Weighing 300 pounds or more, female loggerheads crawl ashore on beaches, dig a hole at the base of the dunes and lay their eggs, usually at night, from May into August.

All sea turtle nests, including those of species that seldom nest here such as Kemp’s ridley and green, are marked, protected and monitored by the Georgia Sea Turtle Cooperative. The DNR-coordinated network of federally permitted volunteers, researchers and agency employees patrols beaches daily during nesting season.

The effort not only eases predation and increases the number of young that hatch, the data collected is used to assess loggerhead populations, assess threats and inform management. Cooperators also help with beach management. The program has been in play on Georgia beaches for more than 30 years.

DNR’s Wildlife Conservation Section works to conserve sea turtles and other wildlife not legally fished for or hunted, as well as rare plants and natural habitats. The agency does this largely through public support from fundraisers, grants and contributions.

Key fundraisers include sales and renewals of the bald eagle and monarch butterfly license plates and renewals of older wildlife plate designs, such as the ruby-throated hummingbird. These tags cost only $25 more than a standard plate to buy or renew. Up to $20 of that fee goes to help wildlife.

If an angler cannot reach DNR, cut the line as short as possible and release the turtle.

Loggerheads at a Glance

More on the Net

Join in The Celebration at a Fun Outdoor Event on Saturday, September 24!

Time to start filling the freezer with venison!