Right whales are mysticetes, or baleen whales. Other mysticetes include humpback, gray and bowhead whales.

Right whales received their name from whalers who called them "right whales" because they were the right whales to hunt—available closer to shore, easy to harpoon and yielding large amounts of oil, as well as baleen for umbrellas and corsets. Measuring up to 50 feet long, adults can weigh more than 50 tons.

Yet North Atlantic right whales are now one of the rarest of all the great whales. There are fewer than 350 left. The species has been declining rapidly since 2010 because of a combination of high human-caused mortality and low calving rates. An estimated two dozen whales have died each year since 2010, most from entanglement in heavy synthetic fishing rope and collisions with boats and ships. At the same time, calving rates have fallen by half, likely because of rising sea temperatures in New England and Canada where right whales feed.

Right whales were listed as endangered in 1970 and are protected from disturbance and injury by the Endangered Species Act of 1973, the Marine Mammal Protection Act of 1972 and the Georgia Endangered Wildlife Act of 1973. 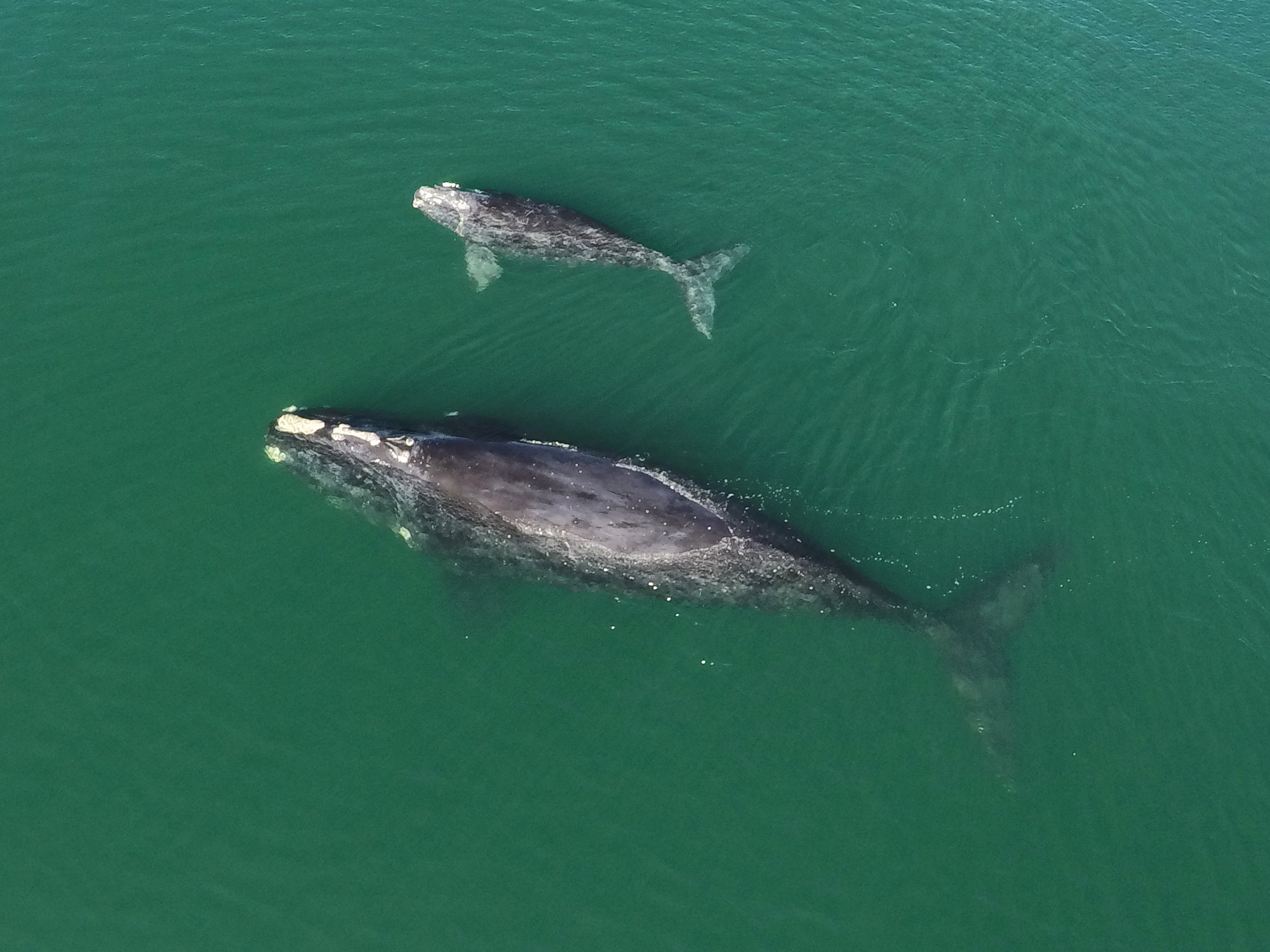 Each winter, DNR’s Wildlife Conservation Section partners with the Clearwater Marine Aquarium Research Institute and the Florida Fish and Wildlife Conservation Commission to conduct aerial and boat-based surveys for right whales off Georgia and northeast Florida. Biologists take photographs of the unique white patterns on each whale’s head—a method called photo-identification—which are used to determine calf production and estimate population size, trends and other demographic data. Staff also collect skin samples from newborn calves for genetic research, and document and respond to reports of injured, entangled and dead whales.

DNR works closely, as well, with NOAA Fisheries and other partners on a range of conservation and management efforts, including the Southeast Implementation Team for Right Whale Recovery (which focuses on vessel and habitat impacts) and the Atlantic Large Whale Take Reduction Team (which focuses on commercial fishing impacts). Funding for DNR’s work is made possible by grants from NOAA Fisheries and donations to DNR’s Wildlife Conservation Fund.

How You Can Help

Despite their enormous size, right whales can be extremely difficult to see. They do not have a dorsal fin, their profile is usually low in the water and they spend much of their time just below the surface.

Mariners operating in the coastal waters of the southeastern U.S. in winter should post one or more lookouts to keep watch for whales. Look for black objects at the water’s surface, large splashes, recurring whitewater and the "V" shaped spout the whales create when they breathe. At night and during other periods when visibility is reduced, use the slowest safe speed to reduce the risk of collisions. Going slow may provide time to react. Collisions have not only killed and injured right whales, they have caused extreme damage to vessels and put people at risk.

If you see a right whale, slow further and take measures to avoid it. Do not assume it will move out of your path. Also, if you see one whale, others could be in the area.

Note the time, position and number of whales, and report the sighting immediately by calling 877-WHALE-HELP (877-942-5343) or by hailing the U.S. Coast Guard on marine VHF channel 16.

Vessels over 65 feet are required to travel at 10 knots or less in designated Seasonal Management Areas when those areas are active (Nov. 1-April 30 north of Georgia’s Sapelo Island, and Nov. 15-April 15 south of Sapelo; maps and more).

Although not covered under the ship speed rule, boats 40-65 feet long have also been known to injure and kill right whales. Boating slowly can reduce the probability of vessel collisions, whale injuries and damage to vessels.