Partners in Flight is an international bird conservation effort. Initiated in 1990 in response to declines in numerous species of Neotropical migratory birds, PIF seeks to reverse these declines and ensure healthy populations of songbirds and other birds for the benefit and enjoyment of future generations.

Many familiar songbirds such as warblers, vireos, orioles and tanagers are among those referred to as Neotropical migrants. These birds breed in North America and migrate to Mexico, Central and South America and the Caribbean to spend the winter. Loss of habitat needed for wintering, breeding and as stopovers during migration has caused significant declines in numerous species of our favorite and most colorful songsters.

In Georgia, over 90 species of Neotropical migrants depend on the forests, thickets and fields of our state as areas to rest and refuel during their long migrations. Many—54 species—also nest and raise their young in our habitats. Although declining, most of these birds are still relatively common, and Georgia Partners in Flight seeks to address and meet the needs of these and other land birds through effective partnerships with state and federal agencies, private conservation and education organizations, corporations, colleges and universities, and concerned citizens and bird enthusiasts.

What You Can Do To Benefit Birds

In May 2010, as part of a long-term study of whimbrel spring staging ecology in Georgia, Wildlife Conservation Section staff partnered with colleagues at the Center for Conservation Biology (CCB) at the College of William and Mary to fit two northbound Georgia whimbrels with solar-powered satellite transmitters.

Whimbrels coming from wintering grounds on the coast of South America spend 6–8 weeks feeding in the marshes of mid- and southeastern Atlantic states. These large-bodied shorebirds put on significant weight during these weeks by eating tremendous numbers of fiddler crabs. Like red knots gorging on horseshoe crab eggs, thin whimbrels touching down in April begin to resemble footballs before leaving in late May. The energy they store in fat and muscle will carry them far.

This species represents many other migrant shorebirds that depend entirely on the thin margin of coastal wetland habitats that border the Atlantic states as they prepare to launch into the Arctic to establish territories and nest. Protecting and maintaining the integrity and health of our coastal lands through risk-averse management and broad conservation efforts has benefits locally and to life well beyond our borders. 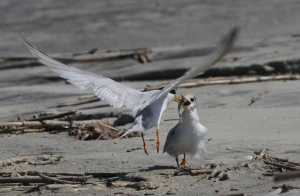 Taking the family to a Georgia beach? Please be ready to share it with families of a different feather—beach-nesting birds.

Beach-nesting birds nest above the high-tide line on wide, terraced beach flats or in the edge of dunes. In Georgia, the birds lay eggs in shallow scrapes in the sand from April through July. After hatching, chicks hide on the beach or in the grass. Chicks and eggs can be difficult to see. Disturbance by humans or pets can cause adult birds to abandon nests and chicks, exposing them to extreme heat and predators.

Migrating seabirds and shorebirds face similar threats. Georgia beaches provide vital stopover sites for species such as red knots. Red knots flushed from feeding might not gain the weight needed to survive their more than 9,000-mile migration from the Arctic to South America.

When visiting a Georgia beach:

The only woodpecker to excavate its home in living pine trees, the red-cockaded woodpecker (RCW) (Picoides borealis) was a common resident of mature southeastern U.S. pine forests at one time. RCWs require large acreages of open, mature, frequently burned pine stands for foraging and the creation of nest cavities. However, populations of this non-migratory species have drastically declined, and the bird is listed under the Endangered Species Act (ESA) because most of its required habitat has been altered through clearing, urbanization, incompatible forestry practices, and lack of periodic fire to maintain pine stands in an open condition.

Most remaining RCWs exist on public lands such as national forests, national wildlife refuges, and military installations where large tracts of woodland habitat have been maintained in suitable condition. Many of these public land populations are under intensive management in an attempt to increase RCW numbers and recover the species from its endangered status. In Georgia, the largest public land populations are found at Fort Stewart, Fort Benning, Piedmont National Wildlife Refuge/Oconee National Forest, and Okefenokee National Wildlife Refuge. State-owned properties with RCWs include Silver Lake WMA and Moody Forest WMA.

Some RCWs also remain on private land in Georgia. The Red Hills region of Thomas and Grady counties supports the largest population of red-cockaded woodpeckers on private lands. Suitable habitat in the Red Hills has been maintained incidentally on adjacent large tracts of private land managed primarily for bobwhite quail. Other RCWs on private lands, however, belong to small, isolated populations on relict fragments of habitat. These birds are continuing to disappear without contributing to the future of the species because of ongoing loss and fragmentation of habitat, lack of beneficial management, and the negative effects of demographic isolation.

Private landowners are not required to contribute toward species recovery, only to avoid "take" as defined by the ESA. Avoidance of take necessitates that landowners do not disturb the cluster of cavity trees used by a family group of RCWs, and that they maintain sufficient nearby pine forest foraging habitat. Sufficient foraging habitat has been defined as a minimum of 3000 square feet basal area of pines at least 10 inches in diameter nearby and contiguous to the cavity trees. This can be somewhat expensive in lost income opportunity because landowners might have to alter intended management activities, such as timber harvest or clearing, that would result in take through loss of habitat.

In 1999, the Georgia DNR developed the nation’s first statewide red-cockaded woodpecker Habitat Conservation Plan (HCP) to provide management options for private landowners. The plan includes options for mitigated incidental take and for Safe Harbor. Qualifying landowners with RCWs on small, isolated properties can have RCW management responsibilities removed from their property once replacement groups of RCWs have been created or equivalent additional habitat has been committed to permanent management at another location where the birds can contribute to a recovery or support population. All impacted RCWs will be translocated before habitat can be rendered unsuitable.

A more commonly used program is Safe Harbor. Safe Harbor targets landowners primarily in southwest Georgia, where plantations managed for the northern bobwhite also support a significant population of red-cockaded woodpeckers. Safe Harbor involves a landowner’s commitment to beneficially manage habitat for the site’s “baseline” number of woodpecker family groups, or those on the site when the agreement is made. A family group refers to red-cockaded woodpeckers occupying a cluster of cavity trees. In exchange for maintenance of this baseline number of family groups, the landowner’s responsibility does not increase if the woodpecker population increases. Safe harbor with a baseline of zero can be used to protect landowners who have no RCWs on their land, but have a realistic probability of receiving dispersing birds from nearby occupied RCW habitat.

In Georgia, 176,593 acres are enrolled in Safe Harbor management agreements covering 105 baseline groups of red-cockaded woodpeckers and supporting 38 surplus groups, or additions to those woodpecker populations. Most of these properties are in the Red Hills region near Thomasville. Since the inception of Safe Harbor in 2000, this population has stabilized at about 180 groups.

For more information on the Red-cockaded Woodpecker conservation in Georgia, call: 478-299-5059

It has long been known that birds collide with man-made structures (buildings, communication towers and power lines), particularly during migration seasons and severe weather. Some estimates suggest that between 700 million and 1 billion birds are killed annually by these collisions. Research has been carried out in a number of cities throughout the nation to assess the extent of bird collisions with buildings in urban areas, and to discover possible ways to decrease the impact of these structures.

The Georgia Department of Natural Resources, Wildlife Resources Division researched this issue in Atlanta with Lee Sexton, a graduate student from the University of Glamorgan (United Kingdom). This was the first study of its scale conducted in Atlanta. Lee worked with eight volunteers and is monitoring more than 40 buildings in Downtown, Midtown, Buckhead and along the Chattahoochee River. The study continued through early October 2005.

For more information on bird collisions and how you can help make a difference, download the attached fact sheets and visit the following websites:

Report sightings of whooping cranes. Migration is in full swing in early fall, during October and November. The birds return north in the spring. Learn more about the Whooping Crane Eastern Partnership.