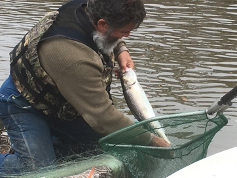 The harvest of American shad dates back centuries. An important food source for native Americans and early American settlers, the historical relevance of the fish has well been documented, including reports that the fish provided a much-needed food source to George Washington and his soldiers during the Revolutionary period. Throughout the 1800s, shad grew to become a species of extreme importance along the entire eastern coast of the U.S., with large commercial fisheries for them developing in the process. By 1897, annual commercial harvest of shad in the U.S. was 50 million pounds (Richkus and DiNardo, 1983). However, fishery declines soon followed, and by the 1940s annual harvest in the U.S. had declined to 11 million pounds (Richkus and DiNardo 1983). Such declines were also seen in Georgia, where an estimated 85% reduction in shad harvest occurred in the state between 1908–1981 (Michaels 1993). Though shad have and still occur in several of Georgia’s rivers, commercial shad harvest in the state has occurred primarily in 5 rivers: Altamaha, Ocmulgee, Oconee, Satilla, Savannah, and St. Mary’s. However, the majority of shad harvested in the state have come from two of these rivers, the Altamaha River and Savannah River, which are the only rivers where commercial shad fishing is still allowed.

As Georgia’s largest river, the Altamaha River continues to be an important natural resource. Formed by the confluence of the Oconee and Ocmulgee rivers, it has been identified as the third largest source of freshwater to the Atlantic Ocean on the eastern shores of North America (Frangiamore and Gibbons 2018). Located solely in Georgia, the Altamaha River drains approximately ¼ of the state, flowing unimpeded (no dams) for 137 miles before connecting to the Atlantic Ocean near Darien, GA (NC 2018). The waters of this river are home to several species of recreationally and commercially important fish. Recreationally, fishermen have historically targeted largemouth bass, sunfish (bream), crappie, and other panfish in the river, along with several species of catfish. Commercially, the river has been home to fisheries for a number of species, most notably American eel, several catfish species, and, of course, shad (American and hickory). Though commercial landings of shad in the Altamaha have averaged over 60k pounds/year from 1982–2017, annual landings essentially haven’t exceeded the 60k mark since the late 1990’s. The fishery, like many other commercial fisheries, has seen less participation and attrition occurring as fishermen age and less younger ones replace them. Nonetheless, the Altamaha River continues to be the main source of shad fishing effort in the state. 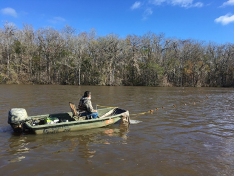 While the Altamaha River continues to support the majority of current shad fishing effort, some commercial shad fishing still occurs on the Savannah River. Formed by the confluence of the Tugaloo and Seneca Rivers, the Savannah River forms most of the border between South Carolina and Georgia. As such, commercial fishermen from both South Carolina and Georgia have utilized the river to harvest shad over the years, though not to the extent of that seen in the Altamaha. However, unlike the Altamaha, the Savannah River has historically been home to a decent-sized recreational shad fishery, particularly around the New Savannah Bluff Lock and Dam (NSBLD). This migration barrier has been an effective tool in congregating fish each year, and recreational anglers have historically taken to the site to harvest shad via hook and line. However, in 2014 the Army Corps of Engineers closed bank access to the wall of the lock due to safety concerns, effectively reducing much of the shad angling activity occurring at the site.

As a result of continued declines in shad landings throughout the 1900s and in an effort to better manage the species, fisheries scientists with the Georgia Department of Natural Resources (GADNR) conduct various data collection efforts utilizing multiple gear types to collect information on American shad. These include tagging of adult shad in the Altamaha River; monitoring of sturgeon encounters by commercial shad fishermen in the Altamaha and Savannah Rivers; seining of juvenile American shad in the Altamaha River; and electroshocking of adult shad in the Ogeechee and Savannah Rivers. Collectively, these data form the foundation from which management decisions pertaining to the shad fishery are made. While some fisheries in Georgia are managed solely at the state or local level, shad are one of our unique species that are managed a bit differently. The management of migratory American shad is not only overseen by the State of Georgia, but also falls under the jurisdiction of the Atlantic States Marine Fisheries Commission (ASMFC). Georgia is a member of the ASMFC and a partner in the management of shad, along with all other east coast states from Maine to Florida. Our shad fishery is managed as part of an Interstate Fishery Management Plan (IFMP) for Shad and River Herring. Under this ISFMP, specifically under Amendment 3 of this plan, Georgia, like other partner states, is required to engage in fishery actions that ensure sustainability of our stocks for each river where shad fishing occurs. To do this, data from our various data collection efforts is collated, analyzed, and used to make informed decisions pertaining to Shad and River Herring management in our state.

In 1982, GADNR staff with the Fisheries office in Waycross initiated a 6-year pilot study to tag shad in the Altamaha River. The primary objective of this pilot effort was to collect basic population data on adult stock size, harvest, catch rates, and exploitation, with findings indicating if stock levels were adequate for continued fishing (Michaels 1984). GADNR staff hired commercial fishermen to assist in tagging efforts, utilizing both their experience and commercial drift net gear to capture shad. Since inception of the project, an annual tagging goal of 500 fish/year has been pursued, whereby captured shad are individually processed and tagged before being returned to the water. Fish are tagged using orange Floy anchor (t-bar) tags placed just below the posterior end of the dorsal fin on the left side of the fish. Randomized variable rewards from $3 ($4 beginning in 1983) to $100/tag are offered annually to encourage fishermen to return captured tags (Michaels 1984). Initially, tagging was done on Saturday and Sundays exclusively below the Seaboard bridge (Alt. Park). This was done for 3 main reasons: 1) to avoid interference with other commercial fishermen, as that portion of the river is closed on those days; 2) to increase numbers of fish for tagging by removing competition; and 3) to allow tagged fish time to recover from handling/tagging stress. However, as the fishing habits of most fishermen changed over the years and many fishermen migrated further upriver to fish, some tagging efforts have extended above the Seaboard bridge on Mondays when this portion of the river is closed. As one of the primary goals for the project, annual exploitation rates are generated by dividing the number of returned tags (R) by the total number of marked fish (M). Similarly, population size is determined annually by the Petersen method using tag return data along with expanded harvest data from the creel survey/reported landings (equation = MC/R).

In an effort to collect information to gain a better understanding of shad population dynamics, GADNR staff began collecting data on young-of-year (YOY) American shad as part of the 6-year initial study that began in 1982 that included tagging of adult shad (Michaels 1984). A primary objective of this juvenile sampling effort was to collect data on YOY shad to determine if correlations exist between juvenile abundance and parent stock size (Michaels 1993). To examine these questions, GADNR staff collected YOY shad during the summer and fall of 1982–1991 (Michaels 1993). YOY samples were collected once per week at 10 sites in the Altamaha River using small-mesh trawl gear. Analysis of this data suggested that indices of juvenile shad abundance failed to produce correlations between juvenile abundance and parent stock size (Michaels 1993). Consequently, sampling of YOY shad ceased until 2010, when preparations for the implementation of Amendment 3 to the Shad FMP were made.

With the passage of Amendment 3 and the new requirement for states to conduct YOY surveys in each of the rivers in which commercial fisheries exist, GADNR staff reinstated sampling of juvenile shad in the Altamaha, Ogeechee, and Savannah rivers in 2010. Since 2010, sampling responsibilities have been shared between WRD (Altamaha River) and CRD (Savannah and Ogeechee rivers). Using a 50’ bag seine, staff conduct sampling during the summer months (July, Aug, and Sept) at fixed sites in each of these rivers as river levels allow. Selected sample sites typically consist of large sandbars conducive to seining, which may be productive during normal-low flow periods but may be problematic and inaccessible in high-water periods. Biological data (lengths, species, etc.) are collected from each specimen, processed, and collectively analyzed, with annual CPUE’s (geometric means) being generated for each river.

As was the case with sturgeon monitoring and YOY sampling, the passage of Amendment 3 led to GADNR staff initiating new shad sampling efforts, including targeting adult shad via electrofishing in the Savannah and Ogeechee rivers. To accomplish this, staff first began in 2010 using electrofishing gear to target adult American shad near the New Savannah Bluff Lock and Dam (NSBLD). Sampling is conducted monthly from February through June, with biological data (e.g. lengths, weights, species, etc.) being recorded for each specimen. Collectively, CPUE estimates derived from NSBLD electrofishing activities are used as one of the management benchmarks in Georgia’s shad fishery management plan. In addition to electrofishing the Savannah River, staff also began conducting monthly electrofishing on the Ogeechee River to target adult shad. Sampling in the Ogeechee is conducted monthly between February and May/June at sites historically known to be popular for adult shad. Similar to efforts in the Savannah River, data from the Ogeechee electrofishing efforts provide managers with additional information necessary to more effectively manage shad. 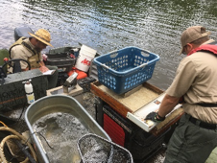 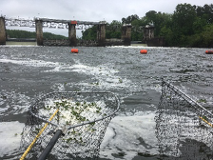